That’s generally a word that everyone recognizes. The problem is that most people know it because they associate it with war. But Drones are starting to become popular for something else. They have recently become a new tool in the real estate industry for showing houses—specifically, the interior of houses.

You may recall our article on the top trends in real estate in 2014 where we mentioned the use of Drones. For now, they’re only being flown on private properties and being kept below 500 feet. 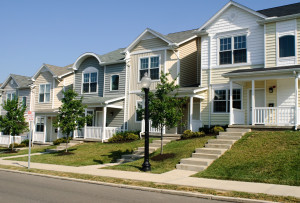 It’s no secret that real estate agents are a creative bunch of people. Think about it. It’s tough to walk a fine line between being professional, not too pushy AND creatively getting potential buyers through the door.

Users were encouraged to tweet an “exceptionally quirky or ambitious” marketing tactic every Thursday and tag it with #madREskillz.

After reviewing the submissions, Inman picked two of the best and put them to a vote on Facebook the following day.

The Wydler Brothers piloted a $20,000 drone around the Bethesda, Md. Neighborhood of Westmoreland Hills. They then used that footage to produce a comprehensive video tour of the neighborhood complete with schools, a market and local restaurants, which has racked up more than 800 views on YouTube.

“Seeing the thing in action for the first time was freaking awesome,” Rob Seaver said. “It has eight propellers, is noisier than a lawn mower, and it is really like looking at something that’s meant for military use—and it’s just sitting there hovering right in front of you.” –

After creating their own drone listing tour, the team decided that they wanted to produce a tour with drone video that would have a longer lasting shelf life. And the idea for a drone neighborhood tour was born, according to this article from Inman.

The neighborhood tour is quick, engaging and fresh—which automatically makes prospective buyers want to click and see what the neighborhood has in store for them.

The agents also appear as specialists in the neighborhood, which in this business is NEVER a bad thing.

The Future of Drones

The Federal Aviation Administration (FAA) is drafting a proposal for new rules that will regulate drones under 55 pounds. The agency is expected to propose the new rules in 2014.

Drones are a sensitive subject, given their association to what’s going on in the Middle East, and the FAA is likely going to take that into account.

For now, real estate agents are erring on the side of caution until official rules and regulations are determined.