Is Nextdoor the New Lead Generator and Crime Preventer?

Users in 22,500 neighborhoods (one-in-seven in the country) are using Nextdoor, “The Facebook of your neighborhood”, to cultivate leads, according to this article from Inman.com.

Nextdoor’s customer base has increased by 400 percent over the last 12 months, according to CEO and founder, Nirav Tolia.

It is also versatile. City government and law enforcement officials can benefit from it as well as neighborhood residents, homebuyers and real estate agents.

At least 130 city governments have begun using Nextdoor to send out important information. And members are using the platform to communicate with their neighbors, get referrals for local contractors, organize community events and to report suspicious activity. 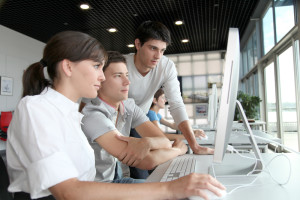 Real Estate agents should be the expert on their neighborhood and that means always staying connected to the community.

Nextdoor makes that a lot easier.

Sarah Leary, co-founder of Nextdoor, said that “countless real estate agents” have recognized the app as a “great way to build real authentic connections with neighbors in specific communities.” It “gives you the power of staying connected with your neighborhood no matter where you are,” she said.

New York City has already begun using the app and San Diego, Dallas and San Jose are expected to get in on the trend as well.

Nextdoor lets users create private websites where locals can ask questions, get to know one another and exchange advice and recommendations.

“We believe that Nextdoor has the opportunity to be for our local life what Facebook is for our social life and what LinkedIn is for our professional life,” Tolia says.

And the platform is gearing up to go international. They have secured a whopping $60 million in Series C financing from veteran investors: John Doerr and Mary Meeker of Kleiner Perkins Caufield & Byers (KPCB) and Lee Fixel of Tiger Global Management.

Nextdoor, which launched in May, is already a source for preventing crime and keeping neighborhoods safe. In February, for example, crime and safety-related posts accounted for 20 percent of the network’s messages, and this remains true today, the CEO and said and TechCrunch reported.

Based on the success of its Neighborhood Watch, Nextdoor has entered into partnerships with over 100 cities while integrating with local police and fire departments, who are now able to access special accounts to issue alerts and dispatches to residents through the platform’s extensive social network.

With its new round of funding, Tolia says that the company plans to continue developing these kinds of safety initiatives, along with initiatives that can add value for civic agencies and local governments.