The Internet of Things Controlling your Home?

You know that gnawing feeling you get when you know you’ve forgotten to do something important?

I used to have a roommate who would leave the stove on after breakfast. I would leave much earlier than her and pray that the stove would be off when I returned home—but unfortunately, most times it wasn’t. However, miraculously, we never had any close calls.

But if I could have prevented that feeling back then, I totally would have. Living in constant fear of your apartment burning down was not ideal. 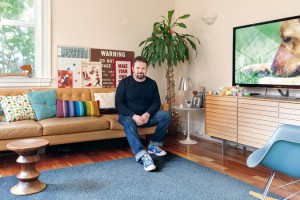 This photo of Tom Coates sitting in his San Francisco home was taken from www.nytimes.com

Tom Coates’s San Francisco home actually live-tweets the movements of its many gadgets. The account, bearing the dignified title @HouseofCoates, updates the world, and the house’s more than 1,000 followers, on the lighting in the kitchen, the temperature in the sitting room and the frequency with which Mr. Coates weighs himself, this article from the New York Times says.

A self-described early adopter, Mr. Coates, 41, has light switches that are controlled by his iPhone, a device that measures whether his plants need water, a motion sensor that informs him, via Twitter, anytime someone unexpectedly enters the sitting room, and, of course, that tweeting scale, says the article.

I don’t think my roommate would have ever forgotten to turn off the oven if Mr. Coate’s software was around a few years ago. And it would have saved our apartment from possible impending doom—so that’s always a plus, right?

The idea behind these products is The Internet of Things. Yes, that is a real term. One day, they hope to be like appliances—only smarter.

“All this stuff,” Mr. Coates said, “has made me feel like I have a sense of what’s going on in my house from a distance, and that it’s O.K.”

The new connected space may also strengthen your relationship with your home, too.

“This may seem really weird,” Mr. Coates said, “but I feel like it’s deepened my emotional relationship with my house.” He says hello out loud when he gets back from work, and said cleaning the house had become an act of nurture. “It’s sort of weirdly pleasant to come home and feel like when you tidy up, you’re caring for a thing.”

It’s probably only a matter of time before the rest of us will be able to experience this phenomenon. Stay tuned.