As Muller’s Facebook page got more likes, he saw his engagement percentage drop. And as a result, his posts were appearing on the News Feeds of fake accounts that had liked his page, but had never actually interacted with him.

Muller says, in this Mashable article, that “the like” is a quirk of the Facebook ecosystem that has emerged as a byproduct of how the News Feed has evolved to display content.

In other words, insincere likes have become all too common.

And since Facebook’s algorithm is built to reward posts that have a strong engagement with its users, the phony likes were making his legitimate posts look bad.

Facebook marketing has improved, however, according to Jeff Selig, CMO of social media marketing firm BostonMediaDomain.

“We gave up on [likes] ages ago,” Selig said. “If you take likes out of the equation and you are actually selling something, I think you’re better off. I think the days of the popularity contest are over.”

Facebook recently admitted, according to Mashable, that as much as 11.2 percent of its accounts are fake, but it did not publish any numbers to back up the fraudulent likes.

Muller contrasts Facebook’s business model with that of YouTube:

“YouTube is paid every time a creator’s video is viewed. That means it’s in YouTube’s interest that each of us reaches as many of our subscribers as possible because it’s financially beneficial to both of us,” Muller said. “Facebook has the opposite business model, where it’s not beneficial to them for us to reach our audience. They want to restrict our organic reach to make us pay for it.” 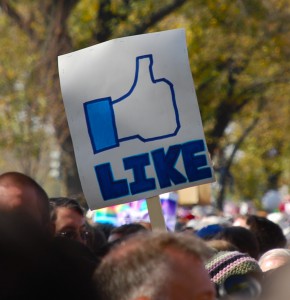 “Fake likes don’t help us. For the last two years, we have focused on proving that our ads drive business results and we have even updated our ads to focus more on driving business objectives,” a Facebook spokesperson wrote in an email to Mashable. “Those kinds of real-world results would not be possible with fake likes. In addition, we are continually improving the systems we have to monitor and remove fake likes from the system.”

Let us know about your experience with Facebook likes in the comments section below.